The shutter had become her eye. She walked through the world seeing things in snap shots, moments clipped from life and developed in her mind. She preferred an old fashioned camera; heavy, mechanical, with spools of delicate film in tidy black tubes. She was forever on the hunt to capture the poignant and the pained moments, the discarded seconds, the moments between smiles or blinks, the way that light fell and wrapped her subjects, or filled a space.

She’d begun as a public voyeur, staking out beautiful people, ragged people, the chic and gauche, the forgotten and the elite. She’d stroll the parks in the afternoons, lunch times sat on a fountain, blending into the background was how she liked to live. She was so soft and mousy, harmless and unthreatening, that she all but disappeared, and had anyone noticed her, they might have mistaken her for a student living in the big city, or a tourist, taking in the local flavour. Mornings she was a docent at one of the big, fancy galleries downtown, quietly herding clusters of guests from portraits to landscapes, to sculptures, and finally, to her favourite exhibits: the photos. She often fantasized that her own images might fill those huge walls someday. She imagined walking through twittering crowds of gallery-goers, eavesdropping on their comments and exclamations at her work, unaware that she was slipping through the crowd amongst them. The thought of the vain glory of artistic fame made her smirk. She wanted to see, and expose, the human condition at its most vulnerable and be the one person in the whole world who saw just what she saw, who toiled for the perfect moment to press that little button, her thumb itching to pull the lever that advanced the film.

The tick and whirr of the camera excited her, so much so that one rainy Saturday evening, she let the record on the turntable revolve long after the songs had ended, distracted by her reflection. She sat on her bed, across from the tall antique mirror leaned against the wall and watched herself: girl with camera. It might make a good photo, she thought, a self portrait that would reveal her to herself. As a rule, she never shot herself, but why not? Why shouldn’t she? She watched her plain face and forgettable body in the mirror, her eyes trained on the glistening lens, so dark and pure that she was nervous to look into it, afraid of what she might see. Her curious little warren of an apartment was silent, save for the wet sounds of traffic outside and the soft shuffle and blip as the vinyl glided freely, round and round. She undressed, never taking her eyes off herself in the mirror, not setting down the camera. It had become a part of her, almost, and the quiet Saturday sounds and low light of her bedroom only fuelled her introspection and highlighted the details she saw: how her bangs fell against her brow, click. The lamplight, glowing pink and amber along her clavicle, click. The soft shadows that seeped between her legs and obscured the copper curls of her bush, click. She drank herself in, photo after photo, and soon the roll of film was nearly full of cheeks and eyes and hips and vulva, dark shots of her small, bare breasts, the bony nubbins of her spine when she hunched and turned away from the mirror, her teeth, her hand, a hollow smile.

In no time, she was on the last picture, her breath held tight in her chest as she anticipated one last image. She stopped and looked over the camera at herself in the mirror. Naked and trembling, she framed up the image, watching herself as she watched herself through the viewfinder, fingertips coaxing the lens into soft focus, her nipples aching at the exhibition of it all. Her finger hovered over the shutter release. A spring loaded click snapped her from her fog and she exhaled, relieved. The moment passed, she lowered the camera, cheeks wet with tears. She looked down into her lap where her hands still held the camera, it’s back panel ajar, film ruined by the light, every picture obliterated. She sighed and pulled out the spool, yanking the smooth brown film from it’s canister, pulling yards of it out like ribbons. She wanted to tell stories with her pictures, she wanted to tell the truth. But not her truth. Not yet. Maybe someday. 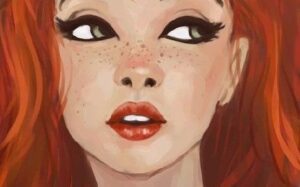 days left to subscribe to the next monthly newsletterJuly 31, 2021
3 days to go.

Subscribe to the monthly newsletter below and never miss the latest news, reviews and members only treats and promotions.

Powered by WordPress | Bootstrap Themes
THE SAFE WORD IS 'NEWSLETTER'

you know you want to